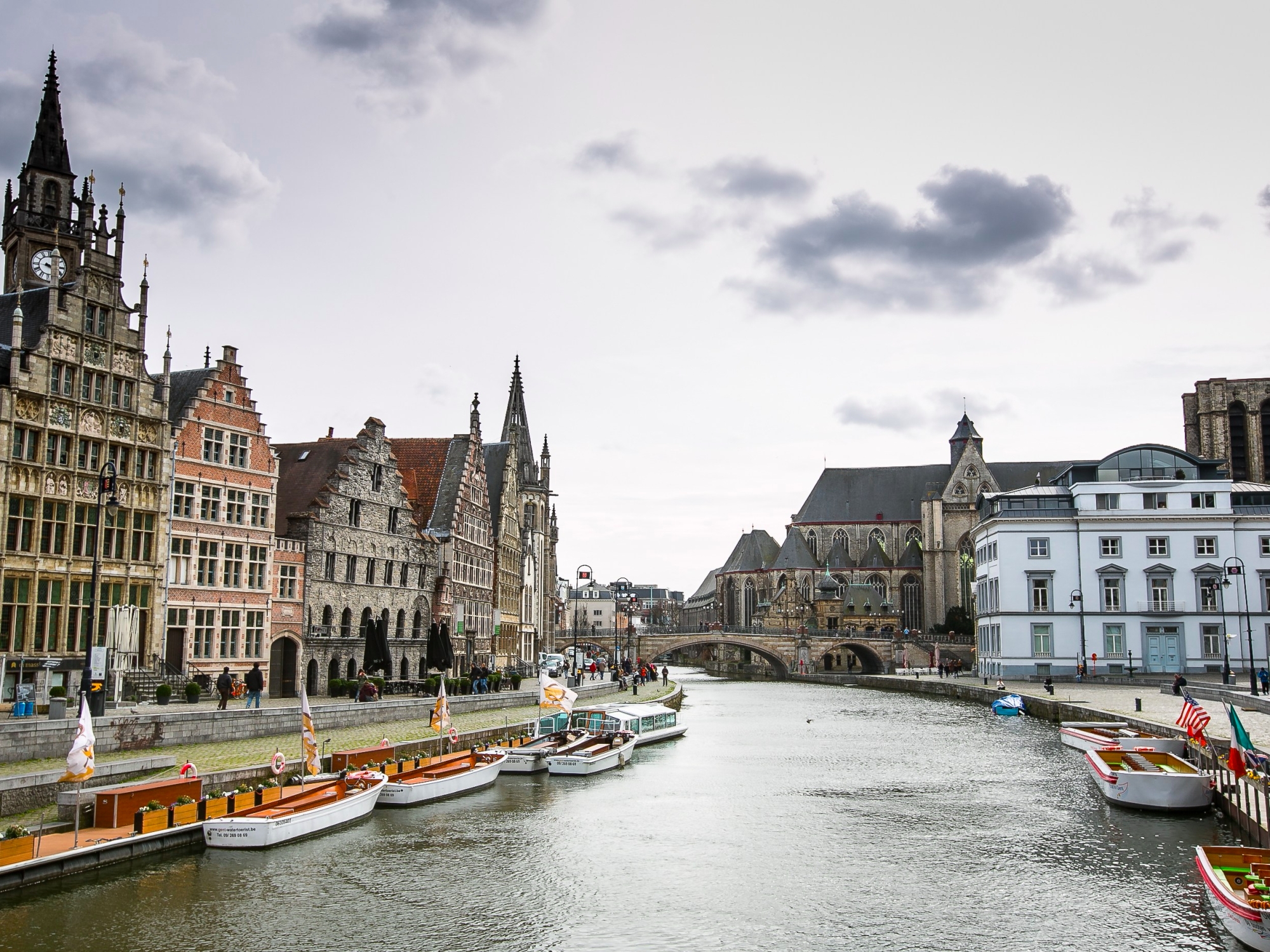 Belgium is a country with so much cultural heritage and beautiful cities. When I was young my parents took us on a family trip to Brussels and Bruges. I don’t remember exactly all the details of what we did during our vacation, but I do remember its fascinating architecture. I wanted to return again a second time, now with my own family.

Our trip included several cities in the region of Flanders and the capital city Brussels. Each one of them was enjoyed as best as we could.

Based on our previous experiences, Dad and I have realized that our children respond better if we have a base city and from there travel to our other destinations. For us, as a family, changing our rental apartment every two/three days makes our vacation complicated and demerits the joy of our trip.  Of course, we always take into consideration the distance between cities, and we know sometimes this option is impossible. But in this case, we did choose to have a base home. It was Ghent.

Personally I think Ghent is a city masterpiece. My words and photographs will come short trying to describe it.
With that in mind, I still want to show some of our memories because the city of Ghent is worth sharing.

There are many things we loved about Ghent. Starting with its eye pleasing medieval architecture. When walking the streets of old town center we felt like part of a storybook. Its size, neither to big nor small, is a plus. Almost all major points of interest are at close distance. Ghent has a lot of cultural background, Charles V was born there! And finally, its chocolates, beer and waffles! Yes, Dad still misses Chocolaterie Van Hoorebeke. 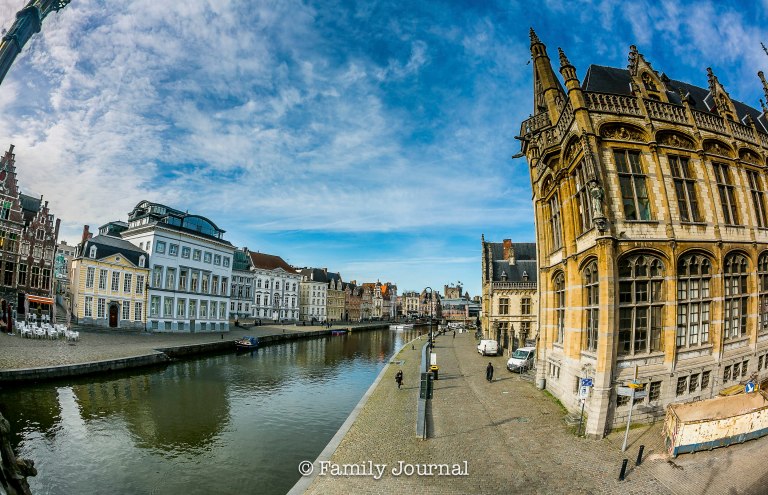 For us, the most beautiful part of Ghent is Graslei and Korenlei. It is where we spent most of our time. We visited museums, churches and landmarks but in the end we would always end up in this part of the old town. This was our favorite spot. 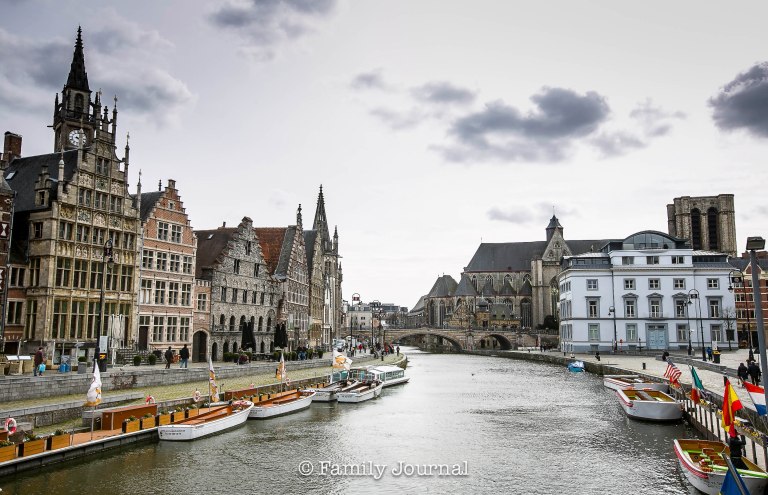 There is something about Graslei… the old houses reflecting on the water, St. Michael’s bridge, the boats decorating the edges in both sides of the river, people passing by and our children trying to catch pigeons (as always), that invited us to return again and again.

Ghent is famous for its three towers. One is the Belfry, the tallest, which is recognized by the UNESCO. We learned that Belfries symbolize freedom, autonomy and democracy. 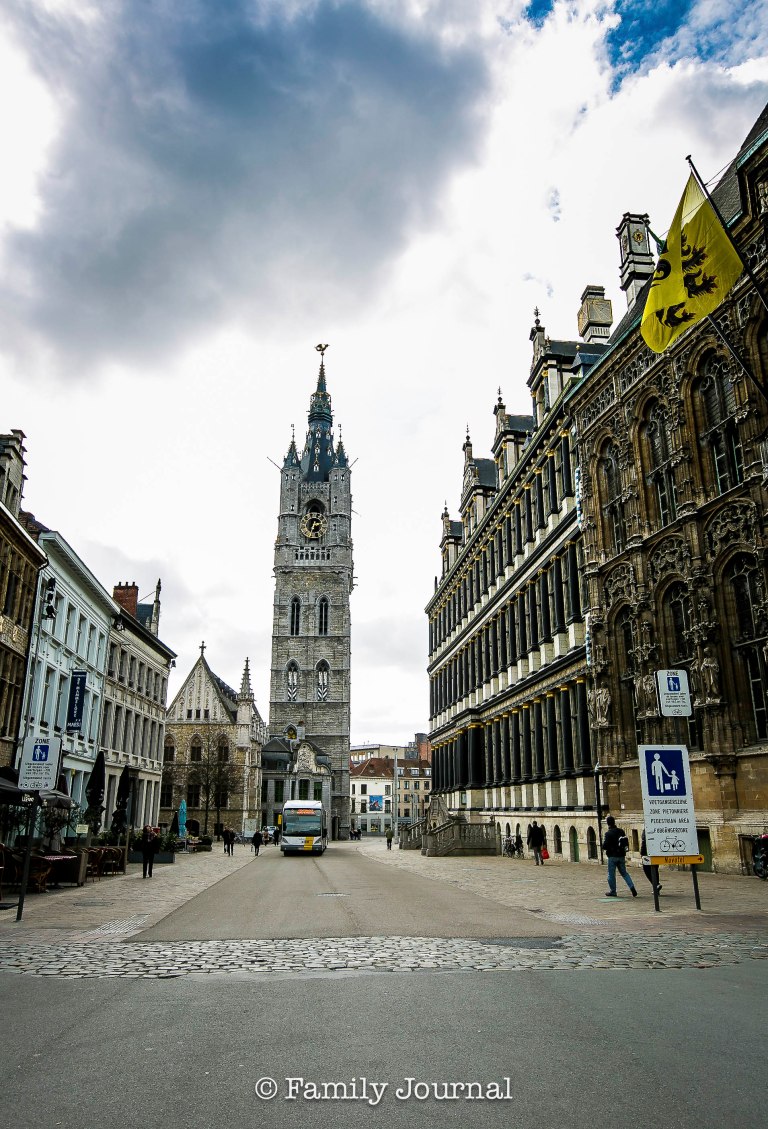 The other towers belong to St. Nicholas Church and St. Bravos Cathedral. Both are worth visiting. 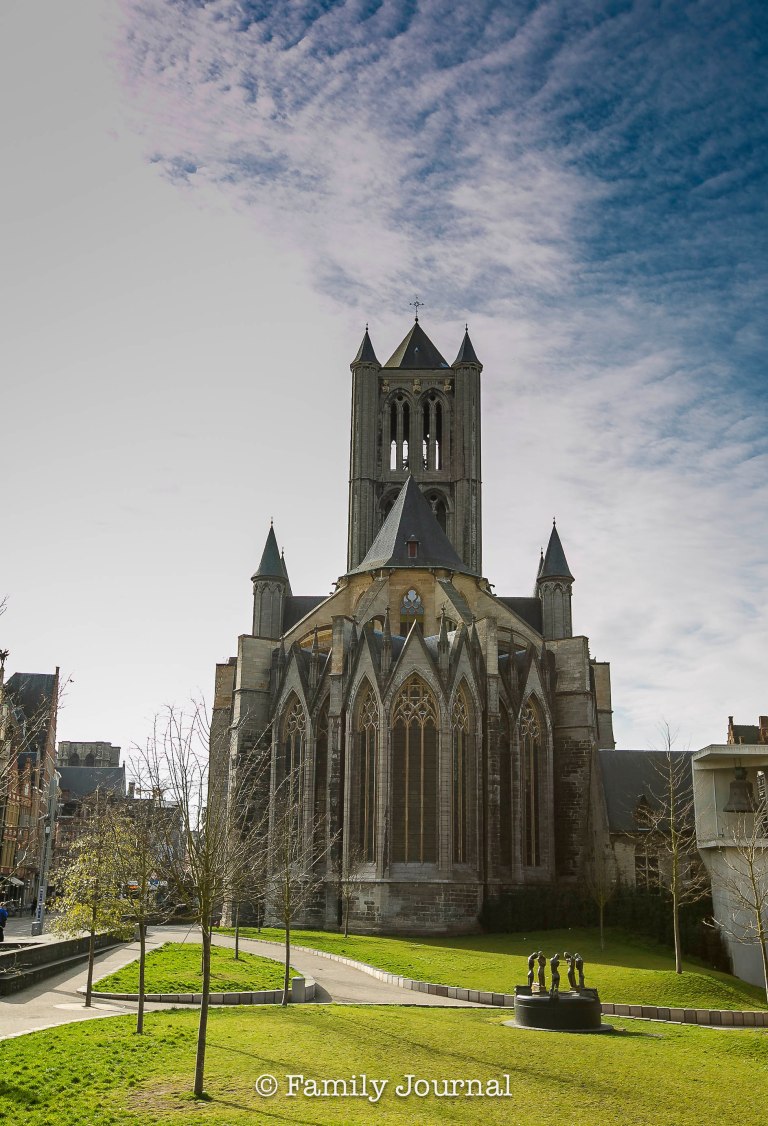 Dad had a mission, finding Chocolaterie Van Hoorebeke, a famous family run chocolaterie. He had read they sell the most delicious chocolates in Ghent. Well, he was not disappointed. In fact neither of us were, we devoured the first box we bought in minutes. We did return several times… Extra delightful!!
Another place we were waiting to experience was Max Waffles. Dad read this was the first establishment in Belgium that served Brussels Waffles. How could we not give this place a try.
We arrived enthusiastic and hungry, just to find out we couldn’t order waffles until 12pm! What?! Why?!
All of us felt frustration and anger. But we really wanted to try them out, so we walked for a while around Korenmarkt until it was time to return…

Near Korenmarkt, the Belfry and St. Nicholas (I did say everything was at walking distance) is a structure named Stadshal. It is a modern construction that contrasts with all the historical surroundings. Weird looking… still Dad took a couple of souvenir photos.

Our time had come to taste that so desired waffle recipe! And to tell you the truth, my memories are based more upon the good time spent during that meal, rather than the taste of the famous waffle. Though it tasted ok, we had tried better recipes. They are big, so E and P shared. We all tried the same, the one with varied fruits and vanilla ice cream. I will say that the presentation of the waffle is beautiful and the ambience of the restaurant is elegant. I love Art Nouveau. And the experience of being in this iconic place, for us, was worthwhile. But in terms of taste, for Dad and me, it was just ok. Maybe it was too much expectation.

When the sun comes down Ghent looks even more amazing! Old town buildings get illuminated. And the ones in front of the canal, with its reflection in the water, present an incredible spectacle. 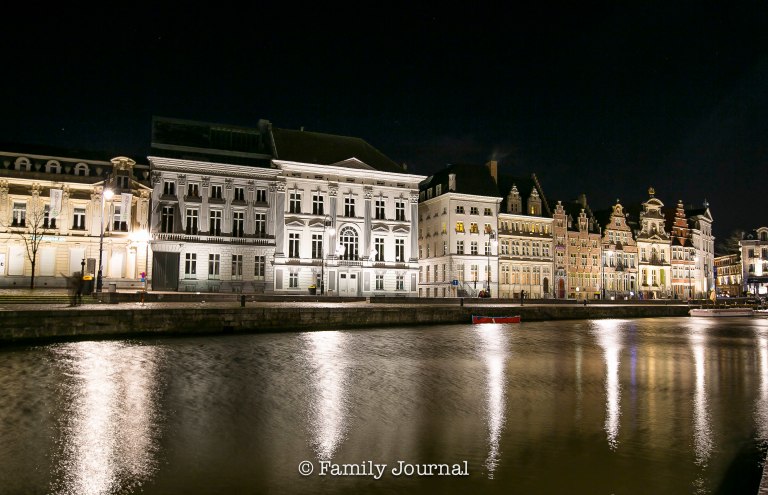 Days passed, we went and came, using Ghent as our home. And on our last night we took a last view of the city we felt as our own. 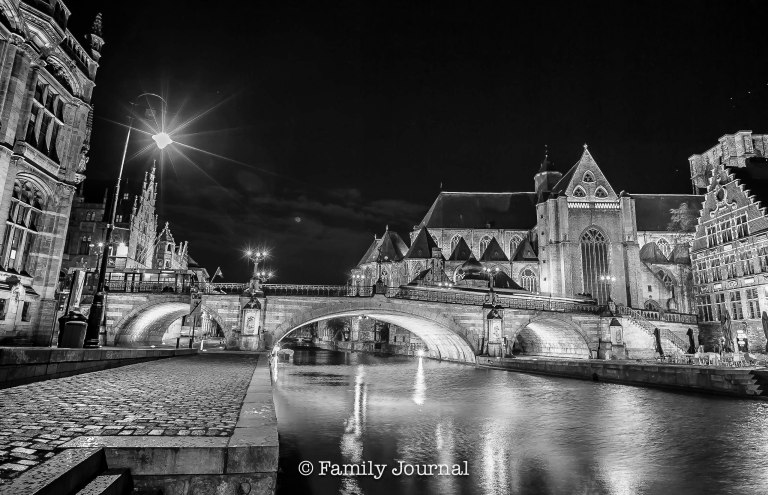