There are so many good memories from Prague. It is one of our favorite cities! I went with my parents in my younger years and being able to return with my own family now was something very special.

I asked the whole family to help me with their favorite recollections of our trip.

So here it goes:

I had to start with Charles Bridge since it so iconic. Plus we crossed it every day. We were staying in an apartment two blocks from Old Town Square so it was our connection to Mala Strana and Prague Castle. We loved walking through it. We were never in a hurry so we dedicated time to carefully observe each statue.

People passing by, merchants along the way, my three children enjoying themselves with the views, we were not just crossing a bridge we were living a whole experience. Definetly Charles Bridge is our first and most memorable part of the trip.

We all love this one! Everyone remembers eating this amazingly delicious doughnut cone filled with ice cream. Before we went to Prague, I saw an article on the internet talking about this ice cream parlor on Karlova 8 and we had to try it. It did not disappoint. We went there several times during our stay.

The Astronomical Clock located on the Old Town Square.

My boys called it the giant clock and apparently they remember it quite well. It took me by surprise they chose that memory.

Every hour the clock displays a show called “The Walk of the Apostles”. On both sides of the clock there are figures meant to represent vanity (a man looking at a mirror), avarice (a man with a pouch, probably gold, and a rod), death (a skeleton, which is the one striking the time) and pleasure/lust (a Turk with a mandolin). On the bottom, where the months are displayed, there are also figurines of a philosopher, archangel Michael, an astronomer and a chronicler. When the clock strikes the procession of the Apostles begins. They appear on the windows of the clock, each one with an attribute that represents who they are. It was interesting for us to see all the details.

Now this is not a listed major attraction but my two boys loved them. We were there on Easter, so Old Town Square, as well as other squares, had festivities going on. Wooden Markets decorated the surroundings with different shopping displays. We saw jewelry, metal ware, toys (primarily wooden), colored hand painted eggs, puppets, and so many other curiosities, sorry I cannot remember them all.

That’s where we had our encounter with the Bohemian Bards Band. They were playing folk music and giving a show. E and P got caught up with the music and wanted to stay there watching and listening. I think it was the first time they had heard that type of rhythm. And they liked it.

For Dad the traditional food and Czech beer served at the Easter Markets were a highlight of the trip. Huge roasted hams and sausages, different types of pastries, everything was delicious. 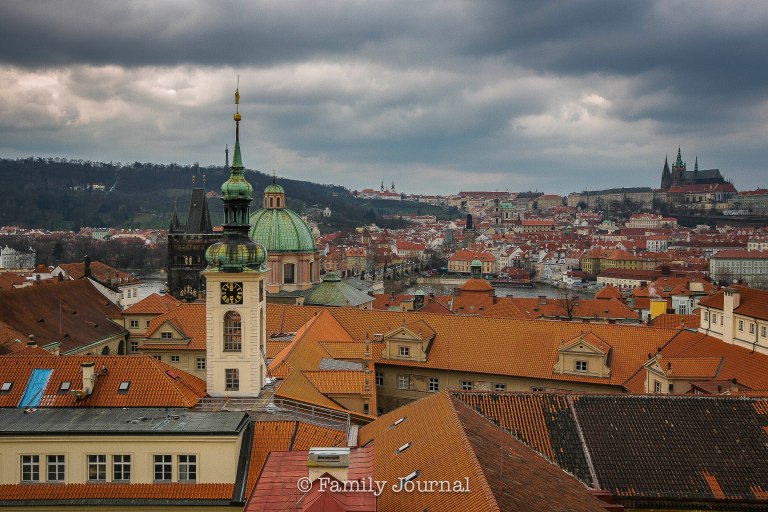 This is one of my favorite memories! We went to Klementinum and through a guided tour visited its library and astronomical tower.

The Klementinum is one of the largest building complexes in Europe occupying more than 2 hectares. It is located next to Charles Bridge. It was first a Dominican monastery until the Jesuits came and turn it into a school. Through time it became a University and expansions were made. Besides classrooms they also built bedrooms, a library, a pharmacy, a theater, St. Salvator Church and St. Clement’s Cathedral.

The library is baroque style and it is simply beautiful. It contains more 20,000 books and valuable globes. I never seen such a thing! Truly magnificent.

On top of the astronomical tower the views of Prague were inspiring! 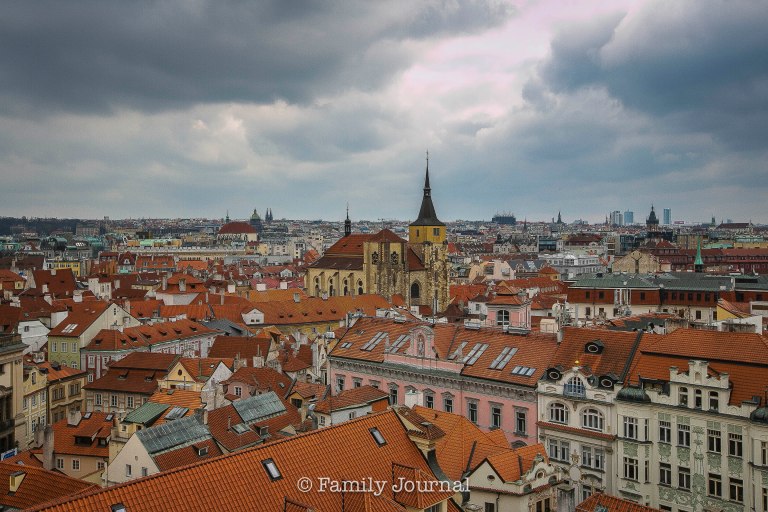 The center of Prague is totally pedestrian and full of souvenir stores. We really enjoyed walking around every corner of every street. 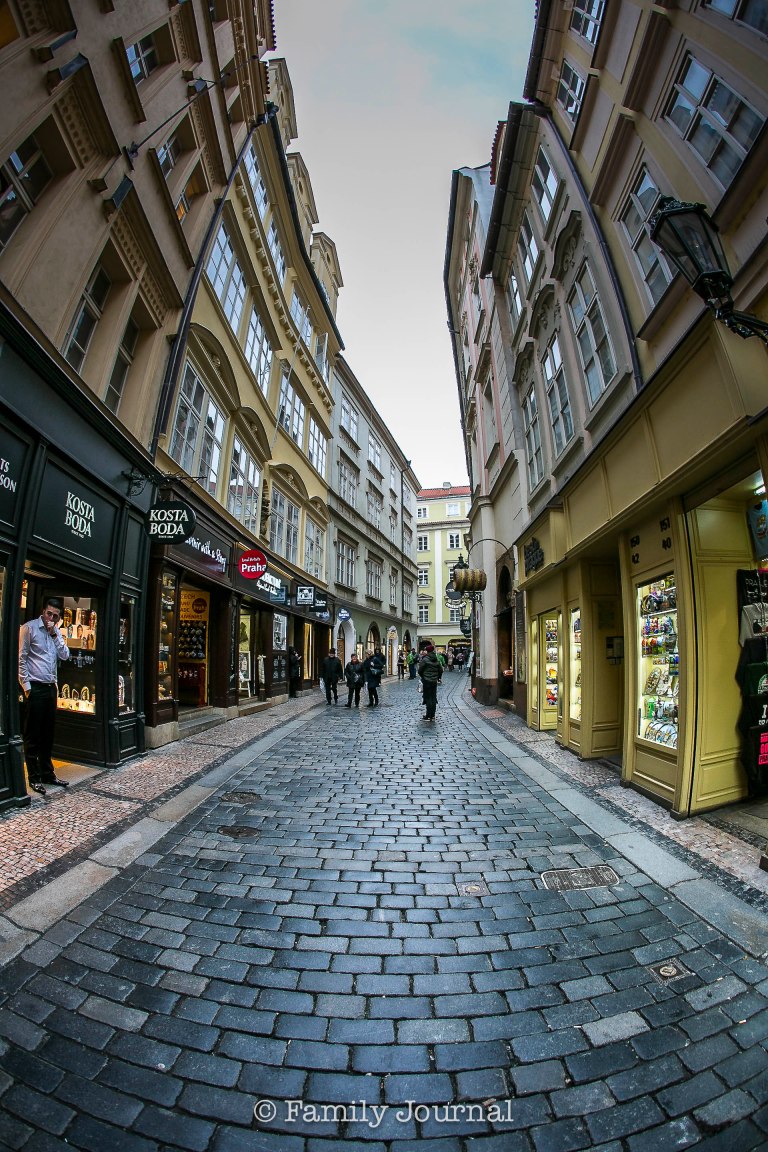 I always buy a souvenir that serves as a reminder of the places we have traveled. It has to be representative and of course made precisely in the region we are visiting. Prague is famous for its bohemian crystal so I decided to buy a beautiful hand-made crystal souvenir. The children helped me choose. While we where searching P saw this little crystal bunny displayed in a corner and asked for it. It didn´t cost much so we bought it. He was beyond happy! He even named the bunny Rocky. For P this is the best memory he has of Prague.

Now the story of Rocky doesn´t end here, and I want to share it… one morning before going to school E and P started playing with it. I had warned them that Rocky was not a toy and it was crystal made, that its purpose was just to be displayed on the cabinet. But they decided not to listen and Rocky crashed on the floor. Tragedy!! Any way, Rocky is still with us and on the cabinet with the other souvenirs. It has no body and no ears, just the head. But P wanted to keep his reminder of Prague…

It is known that Prague Castle is the largest ancient castle in the world. And there is no denying that it enhances the beauty of Prague’s panoramic view. It took us a long walk to arrive there but it was worth it.

E and P love open spaces and better yet if they can find doves wandering around. So the grounds of the Prague Castle were ideal for them to run and have a fun after that long walk. Meanwhile Dad took photos of the surroundings.

The Dancing House and Vltava River

From the first time I visited Prague I fell in love with this building!

Yes, it contrasts with the surroundings and it´s weird looking (my sister tells me it´s horrendous) but that is the whole point, to stand out! Architects Vlado Milunc and Frank Gehry designed the project and it is supposed to be a resemblance of a man and a women dancing. There is a restaurant named Ginger and Fred, refereing to Ginger Rogers and Fred Astaire. 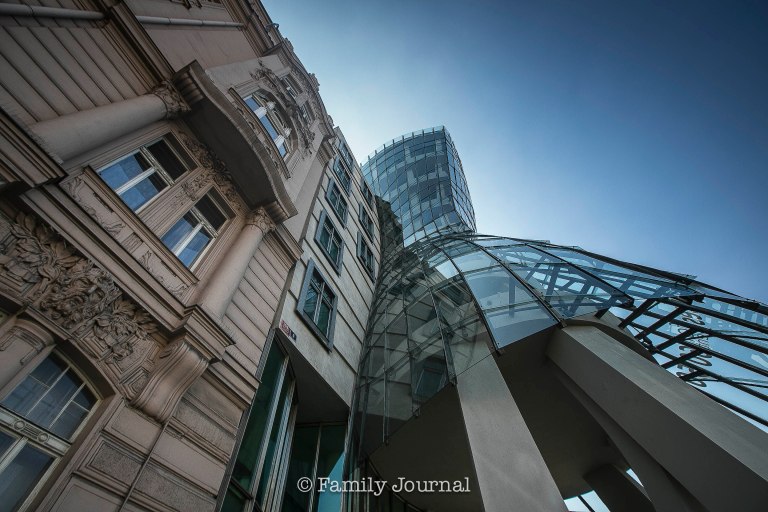 This are the memories we remember the most. Our recollections of Prague from the whole family to you 😉

2 thoughts on “Recollections of Prague”